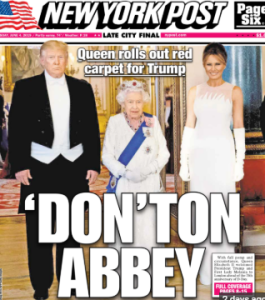 with a HORRIBLY Fitted TUXEDO

"Well it doesn't Fit." Who is his Tailor! Does he have a stylist. This is one person (2?) that should be FIRED (just Kidding). But not Kidding about how horrible The PRESIDENT of The UNITED STATES Donald J. Trump looked is his disastrous Tuxedo. "What The Fuck?"
President Donald Trump wore a Bad Fitting, horrible looking Tuxedo to meet the Queen of England, Queen Elizabeth II at Buckingham Palace in London, England. "Heads Will Roll."
The Queen din't look so great either, more of a SoSo, which is far better than Disastrous. Melania Trump on the other hand looked great, in both her outfit and the way she carried herself, complete with a nice smile. The President  seems uneasy and uncomfortable to say the least. The Queen looks to be saying, "let's get this over."
People have been asking questions on Trump's Ill Fitting Tuxedo, "did you forget you Tux at home and have to borrow a Halloween Butlers Tuxedo?"
There are many problems with the President's Tuxedo, most of all, it's badly fitting. People have begged the question about President Trump, "he's a Billionaire and he doesn't know how to be fit for a Tuxedo? Money can't buy Class," they say.

I'm sure this is the  Last Thing the President would have wanted (to Look Bad and be Laughed at), going to meet the Queen and other Royal, to look so bad, in an Ill Fitting Tuxedo, just doesn't look good. Now all The British Royals, Fashion Mavens, and the World are having a good laugh at the expense of The President of The United States of America, one Donald J. Trump. This is a Major Mistake, and I'm sure "Heads Will Roll" as the British are famous for saying. Quite Ironic, "Don't you think?" 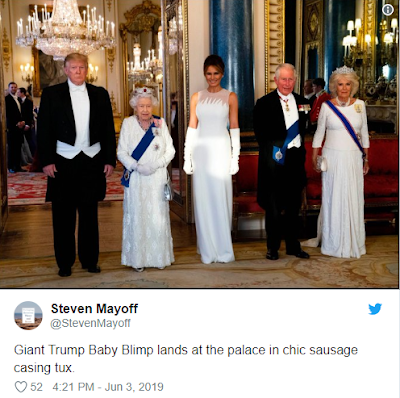 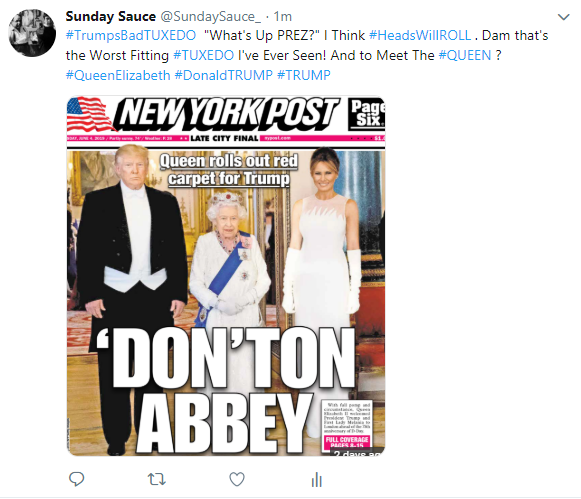 "What's Up with Wearing The WORST TUXEDO EVER
to Meet The QUEEN of ENGLAND?" 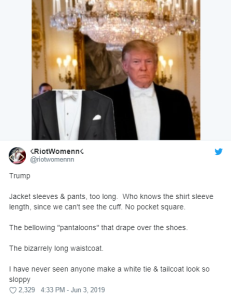 @RiotWomenn says on Twitter " Jacket sleeves & Pants too long. Who knows the shirt sleeve length, since we can't see the cuff.

The bellowing "pantaloons" that drape over the shoes. (WRONG) 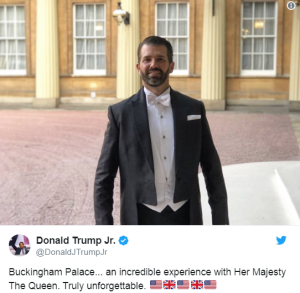 I think President Trump should have asked his son Doanld Trump Jr for Tailoring advice. Notice that Don Junior's Tuxedo Tails is tailored properly unlike his father's, which has a waistcoat that's far too long, making the President look Sloppy. 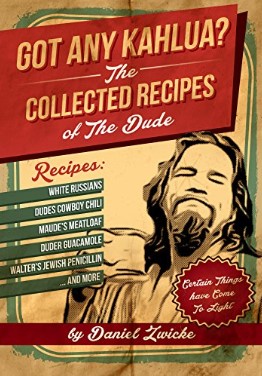 The COLLECTED RECIPES of The DUDE


.
GET The RECIPE For TRUMP'S 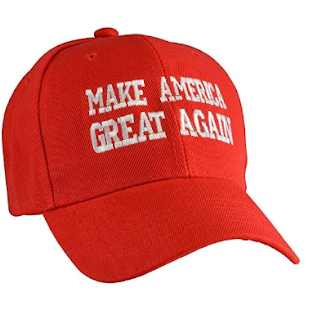 
GET YOUR MAGA HAT TODAY !