Yes He is an IDIOT Mrs TRUMP 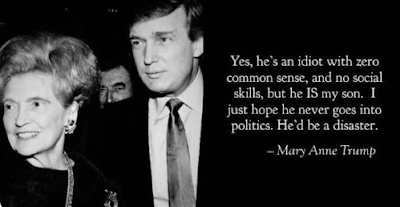 "Yes, he's an Idiot with Zero Common Sense, an No Social Skills, but he is my son. I just hope he Never goes into Politics. He'd Be a Disaster."

Yes, President Donald Trump's mother Mary Anne Trump once said that her son Donald J. Trump was an Idiot, who has No Common Sense and Zero Social Skills.

There you have it folks. What do you think? Was she right or wrong? We want to know what you think.

Email ThisBlogThis!Share to TwitterShare to FacebookShare to Pinterest
Labels: DOANLD TRUNMP Mother Mary Anne Trump said hers on Doanld was an IDIOT who had ZERO SOCIAL SKILLS, PRESIDENT of The UNITED STATES of AMERICA