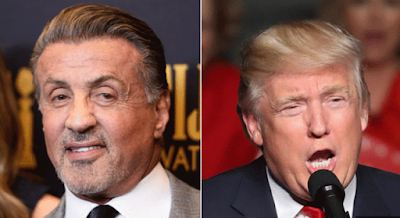 Actor Sylvester Stallone has said he is "flattered" by reports that Donald Trump may offer him an arts post - but would prefer a role helping veterans.
Several publications suggested last week that the president-elect would offer the star a top job in the arts.
In a statement, Stallone said he was "incredibly flattered to have been suggested to be involved with the National Endowment for the Arts (NEA)".
But the star said he would prefer to highlight issues faced by US veterans.
"I believe I could be more effective by bringing national attention to returning military personnel in an effort to find gainful employment, suitable housing and financial assistance these heroes respectfully deserve," the statement said.

Stallone, famed for his role in the Rambo and Rocky films, is also an artist.
He has created hundreds of artworks and last year exhibited at the Modern Art Museum in Nice, France.
In 2013, a collection of his paintings went on display at The Russian Museum in St Petersburg.
At the show's opening the star said, if he had the choice, he would spend his life drawing instead of acting.
"I think I'm a much better painter than an actor," he said.
The Oscar-nominated actor studied art before his film career took off.
In an interview with Variety earlier this year, Stallone said: "I love Donald Trump. He's a great Dickensian character. You know what I mean? There are certain people like Arnold [Schwarzenegger], Babe Ruth, that are bigger than life. But I don't know how that translates to running the world."
Established in 1965, the NEA is an independent federal agency which distributes government grants to arts organisations.
The NEA has come under threat in the past from previous Republican governments, including Ronald Reagan's administration.

Posted by xpicassox at 6:58 AM