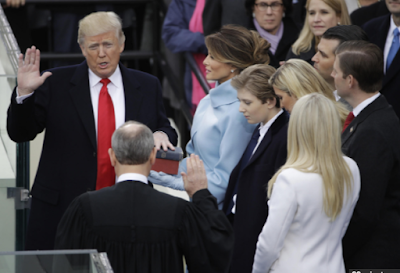 Donald J. Trump sworn in as 45th President of The United States

as First Lady Melania and Trumps children look on  ..

Donald J Trump has been sworn in as the 45th President of America and vowed to rebuild the country using "American hands"."American carnage stops right here and right now," he said on the steps of the Capitol after taking the Oath of Office.
He said he would strip power away from Washington and give it "back to the people".      "We must think big and dream even bigger," he said. "America will start winning again, winning like never before. "We will bring back our jobs, we will bring back our borders, we will bring back our wealth and we will bring back our dreams.
"We will build new roads and highways and bridges and airports and tunnels and railways all across our wonderful nation."
Barack Obama, the former president and his wife Michelle, the former first lady, watched on as they handed power to the Trumps.
During Mr Trump's speech, the rain started falling in Washington.
He and wife Melania had earlier had tea at the White House with the Obamas.
Hillary and Bill Clinton were also there along with other former presidents, George W Bush and Jimmy Carter, and their first ladies. George H W Bush and his wife Barbara remain in hospital in Houston.
It was the first time Mrs Clinton had come face-to-face with Mr Trump since her bruising election defeat to the Republican in November.